Random numbers and Math on AVR32

Probably not a very useful post for veterans but might be useful for those like me who are new to AVR32. In this post, I show how to use the USART example application supplied with AVR32 Studio 2.6, to calculate and print a natural log of random numbers to the serial port.

The reason for choosing this particular sample app is because I can then nicely show something over the serial port. The default baud rate of the serial port is 57600. You can use one of several USB to serial adapters if your PC does not have a serial port (very common these days). To establish a terminal with the serial port you can use the excellent TeraTerm (ttsh2) utility.

I added the code that prints the log values after the following line in usart_example.c

Here’s how the code looks

The reason being that the linker has no way of knowing that you’ll be using the math library unless you specify so. To do that now, head over to the 32-bit AVR/GNU C Linker settings in the project properties. Add a new library to Libraries (-l) called m. 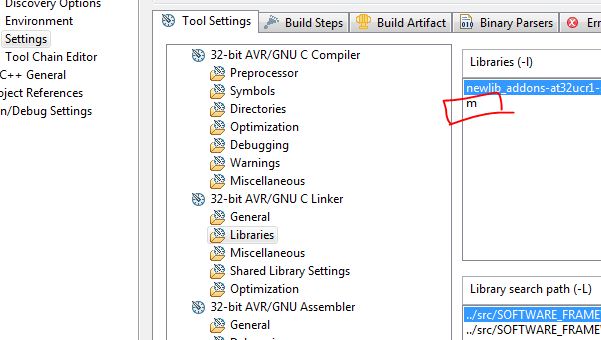 Now, you should be able to build successfully.

You can now deploy the elf file to your development board. I used a JTAGICE mkII target from within AVR32 Studio. Here’s how the output should look if all goes well