Install Firefox in the Android 4.0 emulator

I was looking for a browser for Android that had support for WebSockets. I opened an online demo such as the one at websocket.org in the default Web Browser on the Android device emulator, and was greeted with a message saying WebSockets are not supported.

Getting Firefox is the easiest since its apk can be downloaded from mozilla.org. Firefox will not run on older Android emulator devices which use the ARM v6 architecture, it currently supports the ARM v7a architecture. As luck would have it that is the architecture used by the Android 4.0 emulator device.

Let’s get to installing Firefox. Download the apk for the latest version for Android from mozilla.org. At the time of writing this that happens to be fennec-10.0.3esr.multi.android-arm.apk.

Use adb to install the apk

Use DDMS to install the apk

Note - If ddms fails to connect to the Emulator try resetting adb from the Actions menu.

Run File Explorer from the Device menu. Push the apk to the emulator into the folder /mnt/sdcard. Run the Web Browser in the Emulator. Open url file:///mnt/sdcard/fennec-10.0.3esr.multi.android-arm.apk. That should get the installer going.

Unfortunately for me, online websocket demos such as the one at jimbergman.net, show that Firefox for Android does not yet support WebSockets. 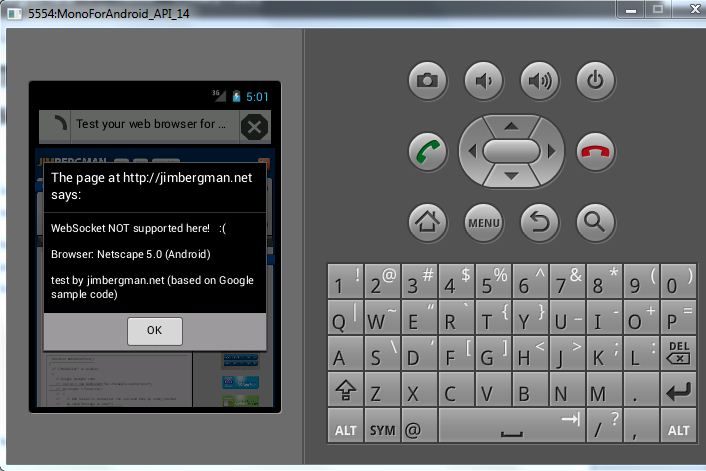 I got this tip from a colleague, and on further investigation discovered that Firefox version 6.0 does not have the WebSocket class, it has been prefixed and is instead called MozWebSocket. Instantiating that class should get you going.