Use SPI bus with the Raspberry Pi Pico

Synchronous Peripheral Interface aka SPI is a rather fast and flexible serial interface although it is unable to support as many devices per bus as the I2C bus. We’ll explore how to use this bus on the Raspberry Pi Pico board, by interfacing it with the commonly available BME680 environmental sensor from Bosch.

The list of parts we need is rather short

You’ll need to have the Arduino IDE set up and ready to go on your computer.

We’ll wire the sensor to the board as follows 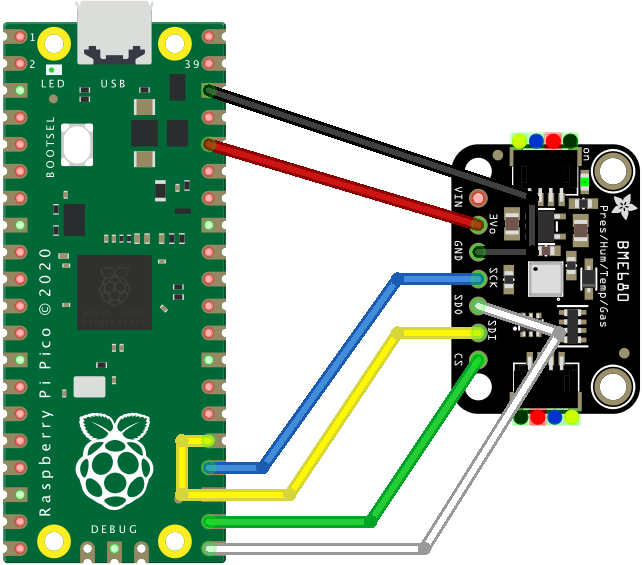 BME680 grove sensor uses the I2C interface by default. To use the SPI interface, you’ll need to physically sever two traces indicated by I2C and 0x76 labels on the bottom side of the PCB. This can be done by lightly but repeatedly scratching with a pointed cutting tool of some kind.

Configure board in Arduino IDE

Assuming you’ve got the Arduino IDE setup and ready to go, you need to add https://github.com/earlephilhower/arduino-pico/releases/download/global/package_rp2040_index.json in Additional Boards Manager URLs, in Preferences.

Head over to Tools menu, Board, Board Manager, and install Raspberry Pi Pico/RP2040 board support.

Head over to the Sketch menu, Include Library, Manage Libraries, and install Adafruit BME680 Library.

Head over to File menu, Example, Adafruit BME680 Library, and pick bme680test. This will create a new sketch based on bme680test example.

The bme680test example is configured to work over the I2C interface by default.

To get it to work over SPI, you’ll need to modify the following lines

Change value of BME_CS to GPIO 17

Connect the board to your computer, and pick the correct serial port under Tools menu, Port.

Arduino IDE will now build and upload the example code

To see the output, head over to Tools menu, and select Serial Monitor.

You should see text such as the following print repeatedly